Thank you very much SunAir, Heating & Cooling for your great service on my air system. It now feels as if a big burden is lifted from my shoulders knowing I can face the heat, head on with confidence and stay cool. I will refer my friends and family to SunAir. The HVAC Contractor Paulreal53@ (on his business card) showed up on time as promised, was in and out without delay and was courteous while he worked. A customer for life, Brian S. Sacramento, CA

After having another company out to our house to resolve our air conditioning issue, Sun Air came to the rescue. He resolved our control board issue, installed 3 new nests, and had incredibly fair pricing and great service. We will use Sun Air for all of our heating/cooling needs.

Paul was very professional and nice! When he came to our house we thought the problem was the condensate pump not pumping the water out because the closet floor where the A/C coils are housed was wet, but luckily he thought about it over night and called to come back out to check it again and found that the pump was fine, we had a hole in the drain pan under the coil so the water was dripping to the floor and the condensate pump wasn’t filling up with water to pump out. Not to mention that he came back out on a Sunday. We were so glad that he was able to correctly diagnose the problem and fix it. He even came back out to check it after he had fixed it when we had a question about the A/C. We will definitely use his company again if we ever have another problem.

This man Paul is a true miracle and honest man. I contacted him about our Heater not working at our tenants property and we only had 72 hours to fix it. Paul was amazing and helped us out tremendously. Fair pricing and over all great guy. We highly recommend him.

Paul is really a nice guy. He’s my go to for everything refrigeration. He’s fast, honest, and really does care. Thanks Paul for all your help.

I moved to Sacramento 2 years ago in July. 3 weeks later my AC went out. A friend of mine recommended Paul. I contacted him and he came out the same day. I was stressing because I thought I had to replace the whole unit. And I was a little worried that he would try to rip me off because I am a woman and have ZERO knowledge about AC units! I was pleasantly suprised how honest he was. He told me I didn’t need a new unit right then but would have to get one in the near future. He serviced it and got it running and it only cost me 40 bucks! Fast forward to 2 years later, my AC was not kicking on everytime I turned the unit on so I wanted to be proactive and have it looked at. I remembered how honest Paul was and called again. I was thinking he would tell me it needs to be replaced because after all, he did say it will need to be replaced at somepoint.

Paul looked at it and suggested he put a booster in it which would assist the compressor. He charged $85 which was still really reasonable. Paul guarantee’s his work as well. He suggested to try the booster first before jumping to buying a new unit. He is really honest and does not try to hussle you at all. I’m referring him to all my friends!

I was fortunate to have Paul come fix our heater through our home warranty. After one company came and said they wouldn’t do it, I asked for a second opinion and Sun Heating came. Paul diagnosed the issue, fixed it quickly and just gave us great service! He is just fantastic! I would call Sun heating and air again if I have any issues, even if they are no longer contracted with my home warranty. Thank you!!!

After reading Paul’s reviews I reached out and spoke to Paul directly. He was able to fit me in today as my air conditioner had gone out and it was quite difficult sleeping in 90 degree house temps. I’m very thankful for his expertise, and quick precise service. He replaced the capacitor and filled up the frion. My AC is running great now and cooled my house down in no time. FYI-I had contacted 4 other well-known heat/air companies in the area with no response. Thank you Paul, I’ll sleep well tonight because of you…woohoo! His prices are great by the way.

Amazing customer service! He showed up on a Saturday for an emergency call and saved us! Our A/C stopped working and our Warranty people said we would have to wait up to a week for an emergency appointment with one of their contractors. We were desperate when we called Sun Air and they saved us from the 100+ degree temperatures we were dealing with. Their charges were extremely reasonable and I could not be happier with the service we received. We are satisfied customers and won’t even consider going anywhere else for our HVAC needs. 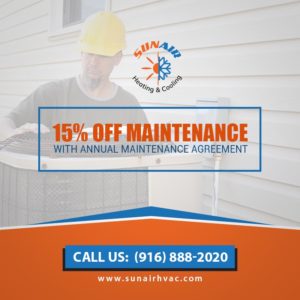